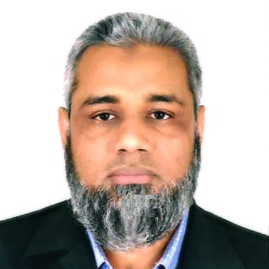 Md. Mahbubor Rahman is the General Manager, Core Network at aamra networks limited. He has been a part of the aamra family since April 2001. He has been in the IT sector for over 20 years and has extensive knowledge and experience in working with core network, enterprise software development, cloud solutions and system management. Mahbub over the years, has played an instrumental role in the expansion and development of the core network of aamra. His technical knowledge, and strategic visions have played a critical role behind aamra’s technical proficiency. In addition to his remarkable contribution to aamra’s core network, Mahbub also played a major role in the set up and maintenance of ‘aamra cloud’, nation’s first localized public cloud solutions. Additionally, he has been the architect of aamra’ internal Enterprise Management System (EMS), a massive 360 degree system for enterprise management and coordination. Mahbub’s skill in networks and programming is well-know throughout the industry. But his true talent is his capacity to dig deep and analyze requirement from the perspective of different functional teams, i.e. sales, credit control, accounts, marketing etc. Mahbub has also played a major role in aamra’s Microsoft Cloud Solutions business in the capacity of solution architect and technical leader. Beneath his soft-spoken and introvert personality, Mahbub is a versatile and multi-dimensional technology strategist. His array of knowledge and vision has significantly contributed in the progress of aamra over the years.

He joined aamra as System Administrator and later became the Assistant General Manager before becoming the Deputy General Manager of aamra networks limited. Prior to joining aamra, he worked in Information Service Network (ISN).